This is a continuation of the previous post. So the day we were supposed to move hotels to Amsterdam, we spent the morning doing some last minute shopping in Primark (sempat lagi tuh), had a scrumptious fish and chips lunch at Marks and Spencer, checked out and then finally took the train into Amsterdam.


By the time we checked in, it was pretty late in the evening. After some food courtesy of room service, we took advantage of the long daylight hours by walking around town. We didn't venture far, but far enough for us to take a stroll around Red Light District. Don't worry, there was nothing controversial to see in the broad daylight anyway! So I haven't corrupted my kids (yet!) *chuckles*


The next day, I took the ferry to the office. Yes, to get to our office in Amsterdam, you have to take a ferry! Meanwhile, Hubby and the kids explored the city even further. I believe they went to the Floating Flower Market, where Hubby was tempted with some cannabis seeds. *facepalm*


After work, I joined them and we met in front of Anne Frank's house. The queue was absolutely ridiculous!!! At least 3 hours to get to the front door. Although Aiden had so many questions about Anne Frank and how they hid from the Nazis, I made the executive decision to cancel our visit. And since I read the diary and even visited the house back in 2007 (I did not remember a queue this long), I tried my level best to answer his questions, as far as my memory could serve me of course.

Instead, we tried raw herrings at one of the many haringhandels (herring carts) we saw around town. Apparently the best time to try raw herring is between May and July when the herring is said to be at its sweetest.


To our surprise, Aiden loved it! He had at least one platter for himself. I am so impressed with the fact that he is adventurous with food. As for me, I think I prefer sashimi. The idea of eating raw fish with pickles and onions just didn't appeal to me. I preferred the Kibbeling instead; bartered and deep fried morsels of white fish, usually cod. Served with a mayonaisey herb sauce and lemon. Yum!!

Another on the list for us to try was thick Dutch fries. Served piping hot in a paper cone, slathered with any manner of tasty toppings. We asked for mayonnaise and some zesty spicy sauce. But the famous toppings are 'patatje oorlog' - a dollop of peanut satay sauce, mayo and onions; or 'patat speciaal' - a mix of curry ketchup, mayonnaise and onions. To end the night, we had dinner at one of the restaurants by the canal and then headed to Hard Rock Cafe.

The next day officially marked the start of our holidays. First stop... the famous IAMSTERDAM sign. Located at the back of the Rijksmuseum on Museumplein, it is a city icon and a much sought after photo opportunity. It is more than 2 meters tall and 23.5 meters wide. It is a wonder how Hubby managed to climb on top of the slogan for a photo op!


We then walked over to the shopping strip. Stepped into Chanel in search of a silver handbag or a black wallet on chain. Just my luck, they had three different black WOCs - the black Chanel boy, the black classic in caviar, and the dark grey classic in caviar with rusted hardware. I was torn between the Boy or the rusted hardware, hence I took some time to decide between the two (calculated currency exchange, price difference etc.) I was not impressed with the SA as she started acting pushy. She immediately kept the more expensive WOCs and pestered me to get the cheapest one of the three. It just didn't feel genuine, you know? In the end, I walked out... And brought my business to Dior instead!

The Dior SAs were such a godsend! We were the only customers in the shop, so we were treated like kings and queens! They showed me bag after bag after bag, and yet no one pushed me to choose quickly. After I had made my choice (a lovely metallic Diorama in silver) they offered us coffee and tea, and even tempted me with a beautiful rose pink Lady Dior that had just arrived that morning. Since I couldn't muster up the courage to spend on two bags in one day, they even offered to keep it for me until the end of they day - just in case I change my mind! Love love love Dior.


Satisfied with my purchase, we headed back to the hotel to drop my shopping bags and then headed for our next adventure; an open boat cruise around the Amsterdam canal ring.

But that... will be the subject of my next blog post. Stay tuned for Part 2 of Amsterdam! But before I officially sign off, here's a photo that needs no explanation: 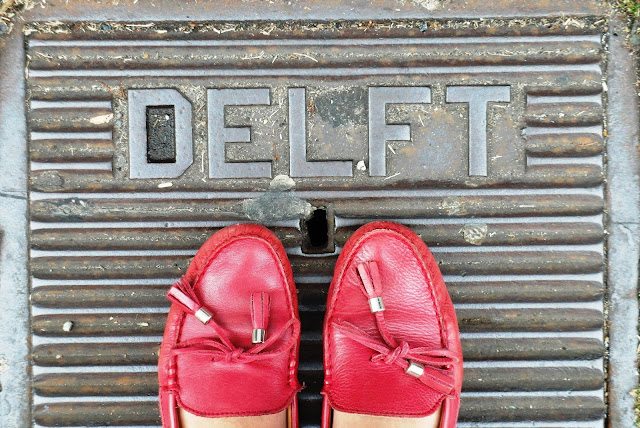 (Apologies, this was written while we were still in Paris, but only posted today!)

So the last time I wrote, I was excited about having my team building event in Delft. Delft is just 20 mins away by train from The Hague. It is a quaint little town which looks very much like a mini Amsterdam; buildings and canals wise.

As soon as I got off the train, I saw an actual functioning windmill. It was quite a walk away, hence I didn't get the chance to explore. Walked with my team mates towards the town square, which is also where William of Orange was buried, in the Nieuwe Kerk (New Church) of Delft. Every member of the Dutch Royal Family since then has been laid to rest in the same place. The town square was hosting their weekly Saturday market sale, so we managed to get some coffee and Stroopwafel muffins for breakfast. Incidentally, it was one of the coldest mornings I've experienced since we arrived (reminded me soooo much of Sakhalin), so my fingers and ears were freezing from the outdoor experience.


Delft is a canal-ringed city and home to the Delft University of Technology. Apparently, whenever one graduates from the university here, there is a ritual where you throw away your bike into the canal, as a symbol that you are now allowed to buy a car. The Delft municipal council has had to dredge several of these bikes out!

I was notably charmed with Delft, so I quickly texted Hubby to bring the kids over. They had no plans that day anyway, since I was going to occupied with my colleagues for at least half of the day.


My team and I then took a quick boat ride around the canals, and mid-way we got out and walked to Royal Delft. Royal Delft is the official manufacturer of Delft Blue. We started with the Royal Delft experience - a guided tour around which included a painting demonstration and a wander through their museum collection. We then ended our team building session by attending a Delft Blue workshop, where we were given the opportunity to paint our own Delft Blue tiles!


We were given a short practice session at the start of our Delft Blue workshop. We were allowed to try out our fine brush and thick brush on a broken piece of tile; just to get familiarity with the amount of pressure you need to exert to get the desired effect. After that, we were asked to choose a design to attempt. I chose to paint a typical street building of Delft. *ambitious much* You can also choose to paint your own design too. As soon as I made my choice, the workshop coordinator took an empty tile and rubbed charcoal dust on the stencil sheet, which in turn provides a basic sketch on the tile. Charcoal is used to sketch because it easily burns off during the firing. (So if you don't paint over the charcoal, it will disappear in the end product.) Using the sketch as a guide, I then painted the tile with the black cobalt paint. Since I am not artistic and have literally zero imagination (*chuckles*), I made sure I followed the intensity as depicted in the sample picture.

The painted product is not ready to be taken home immediately as they must first be fired. Hence we made arrangements for it to be shipped to our local office, and then posted to Malaysia. So... no final masterpiece photos just yet! But what happens behind the scene, is that glaze is applied to the tile and then fired. During the firing, the glaze melts and become all shiny and transparent, while the chemical reaction between the glaze and the cobalt paint, changes the colour from black to blue.

After that, I joined Hubby and the kids who had arrived safely and were having fish and chips at the town square. Apparently while waiting for me, they went gallivanting across town to visit the functional windmill that I saw from the train station that morning. They had to take quite a number of steep steps to get to the top, and when they arrived, Aiden refused to step outside. Ian on the other hand, ran everywhere so confidently, that Hubby had to pull him back.

We then spent the afternoon browsing in the shops within the square. We bought Delft Blue ceramic plates (of course!) and cheese. Particularly flavoured cheese, such as red pesto, green pesto and even blue lavender cheese. Henri Willig is a particularly established brand for cheese.


I think this post is getting too long so I shall stop here. Next post, Amsterdam!
Posted by LizYahaya at 12:00 AM No comments: