OMG. Where do I even start.

I'm swamped - up to my head. My new role keeps me on my toes most of the time, and of course - so much to learn, so little time. My calendar is full with meetings, to the point that I've had to completely block out certain days to prevent people from booking my time. I've also been giving a lot of energy and attention to work, clocking over 10 hours on certain crazy days; hence the kids are feeling slightly tersisih. And the only reason why I am able to write this, is because I'm stuck in a car on the way to a getaway with the family. My first day off in December!

Other than work, Ian's 4th birthday party kept me equally busy last week. (Such bad timing!) But still - I persevered. And I'm so glad I did, because Ian, being the sweet little boy that he is, was totally excited and extremely grateful. He kept saying thank you for every little thing that I was baking at home. Made it all absolutely worth while!

We toyed around with the idea of cancelling his birthday party, especially since we had made the trip to Legoland back in November. Tapi in the end, tak sampai hati because he kept asking "What (theme) is my birthday??" *chuckles* So in the end we relented. Initially he wanted Paw Patrol tapi mane pulak I nak carik anjing as a mascot. Hence after much coaxing, he vetoed against his Babang's idea of a Minecraft party and went with a Hot Wheels party! I'll save details of the party for a separate post.


Anyway, we're currently heading for a beach getaway in Kuantan. This is actually our annual holiday with a couple of close neighbours. The plan is to mandi pantai and eat eat eat. Currently on the list is Patin Masak Tempoyak in Temerloh, Ana Ikan Bakar Petai in Tanjong Lumpur, sata and celup tepung at Gerai Mokna, Cendol Air Putih and of course, the night bazaar at Teluk Cempedak!

Hopefully I can still fit into my pants come Tuesday (back to work again)!

To my blog readers who are celebrating Christmas, have a blessed Christmas. And to everyone else, Happy New Year. May 2018 be kind and prosperous.
Posted by LizYahaya at 1:37 PM 2 comments:

So Much Love in my Mid-Thirties

I feel so loved.

On the day that I turned 35, Hubby organized back to back celebrations and planned a stream of continuous surprises. Not only was I in awe, I felt so loved and appreciated by the family. Hands down, Hubby topped last year's event by a mile. I don't even know how he's going to top this next year.

It started with a surprise birthday macaron 'cake' at midnight... In bed! In all
honesty, I was genuinely surprised. We had tucked the kids in bed and he had given me my mandatory birthday kiss sharp at midnight. We turned out the lights and suddenly he said, "Alamak, I forgot my charger downstairs!" So off he went trudging in the dark. All of a sudden, the lights came back on and the boys (kids included) walked in with the 'cake'! Memang unexpected!!! Turns out, he planned the whole thing and even gave his phone to the kids to watch YouTube so they don't fall asleep! No wonder he had no problems with me heading up early to shower, solat and get ready for bed. Selalunya mesti nak naik sama-sama as a family! Rupa-rupanya dok busy susun macaron cake and even cairkan chocolate for the lettering on the platter. So much effort! That night, I slept with a huge smile on my face. *grin*

The next day, I was on annual leave hence after saying goodbye to Hubby as he left for work, I lazed around in bed enjoying my birthday morning. A delicious smell started wafting upstairs, so my tummy decided that it was time to wake up. Went down and was greeted by a beautiful breakfast spread on the dining table. As usual, without fail, Hubby had prepared a birthday breakfast feast fit for a king! Tea, scones, yogurt and even lasagna! Patut lah the day before he arrived home late, singgah Jaya Grocer rupanya to buy the goodies!


After such a fulfilling breakfast, my SPK gang decided to drag me out for yet another round of breakfast. Laksam and nasi kerabu! Drove back home and spent time with the kids, again lazing around doing nothing. Suddenly the bell rang... Special delivery! A bouquet of 24 roses to be exact! I was ecstatic... It such a lovely surprise. Yes, Hubby gives me flowers... But he has never arranged for flowers to be delivered. So touched that he had pre-planned everything. No wonder-lah he kept calling me asking about my whereabouts; he was worried that the flowers would arrive while I was at the hair salon! (Although he was slightly gutted when the bouquet arrived with pink flowers and pink bulu bulu, when he explicitly requested white! Takpelah Hubby, I love it all the same!)

I then left for my hair and facial appointment. By the time I got back home, it was late afternoon. Showered and got myself ready for dinner. As usual, never breaking tradition, the destination was kept secret. I asked Hubby, whether the place we were heading to had air-conditioning (yer la nanti pakai baju tebal, berpeluh pulak), and he answered, "It will be outdoors. But if it rains we will go indoors." I remembered thinking, "Alamak, is he dragging me to a picnic or something??" Dressed myself in something loose, bundled the kids in the car and off we went to the secret destination.


It was a longggggg one hour drive. A prior drizzle made the trip into KL exceptionally excruciating. Horrible traffic! Hubby kept me guessing the whole way - rasa macam pusing satu KL. By the time we arrived, we were all famished. Turns out that we were going to have dinner at our favourite restaurant, back when we were still dating. We hadn't been there for over 5 years and the restaurant then moved to a different location in KL, hence it was our first time at this new location.

Food was good, as usual. Tamarind Hill never disappoints! At the end of the meal, Hubby apologized, "Sorry yer yang, I didn't arrange for any cake, but you can choose from the dessert menu." I immediately called him on his lie. Refused to order any dessert. Tuh la, sapa suruh buat ayat konon simpati. I know my husband very well, he lovesssss to keep me in suspense.

And of course, I was right. There was a cake prepared. But never in my wildest dreams did I guess that this cake would be served as my 35th birthday cake!

If you're following me on Instagram, you would have seen the cake. It was a 3D durian cake. I think I squealed like a little girl!!!!! Gila excited dapat cake durian, since I'm such a hantu durian kan. On first glance (and even second glance), it looked exactly like a real durian (minus the smell). Even the batang was painted to look like it was real (it was made out of chocolate). It looked so real, that the patrons sitting beside out table kept stealing glances and smiling at us.

The cake was divine - the cake layers were of a sponge cake texture, made from real D24 (it even had bits of durian in it), frosted with layers of durian cream frosting. I swear, on first bite I felt like I had died and gone to durian heaven. It was that good. Dah la cantik, sedap pulak tuh. I think I had at least three helpings, and then more at home.

After the durian cake, I honestly didn't care about my birthday present. I was already absolutely elated. But of course Ian wanted to open his presents (toys and then more toys) and then my turn came up.

Hubby presented me with a Ferragamo paper bag. I looked at him suspiciously. I didn't have any desire for handbags from Ferragamo, nor did I tell him about my longing for those adorable Ferragamo ballerina flats. Inside the paper bag was a huge box wrapped with paper. It had a lekuk at the top, like a shoe box! Tore the wrapper and yes, a shoe box dropped into my hands. Got even more confused cos Hubby awal-awal dah cakap he wasn't going to fund any handbags or shoes. Opened the shoe box, only to find a smaller box nestled in between more paper wrappers. Ahhhhh... It was just one more of Hubby's tricks. He's such a master of surprises these days! Anddddd I'm going to leave the story hanging there. #sorrynotsorry! Sama macam tahun lepas, Hubby wants me to keep it private. (Hint: it's not a laptop bag!)

It was the perfect ending to the night. What more can a girl ask for; from being serenaded at midnight, to flowers at noon, to a durian cake at dinner and then an unexpected present to close the night. Hubby, thank you so much for all the effort that you've put in to make my birthday such a memorable one. I love you to bits and pieces!

(On our way home he told me how he had been having troubles sleeping due to not only the anxiety of ensuring that the plans will work, but also the excitement of seeing his plan in action. Well Hubby, you can sleep well now, cos this 35 year old lady is deliriously happy!)

Email ThisBlogThis!Share to TwitterShare to FacebookShare to Pinterest
Labels: Birthdays 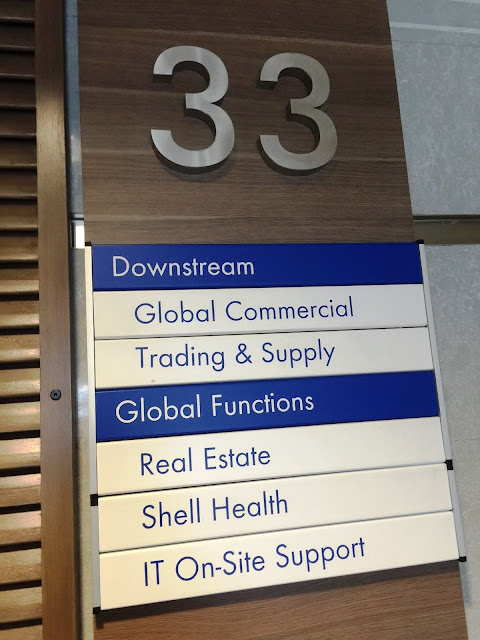 Today marks the day that I embark on a new beginning. A new role to be exact; something completely foreign to me. I won't elaborate much (because I was just made aware that some folks in my new line of business actually follow this humble blog of mine *chuckles*), but rest assured that I am looking forward to this new domain and the challenges that come with it.

Looks like I'm done with the helmet and steel toed footwear, and transitioning into formal tops with slim fit pants and shiny shoes to boot.