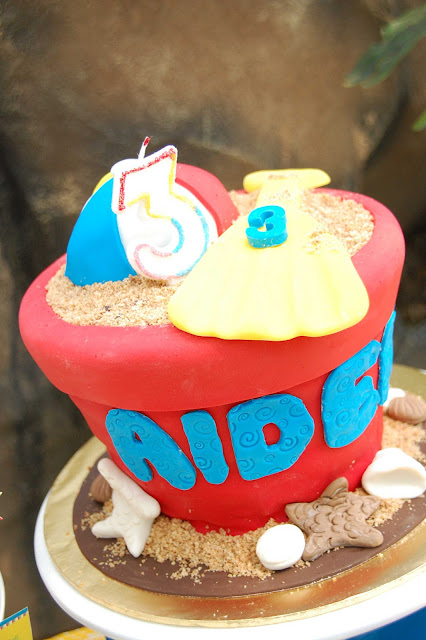 What good would the first quarter of the year be if I did not s﻿weat on organizing Aiden's birthday party? Well this year was no different. As usual, I had the theme for his 3rd birthday even before hosting the 2nd one, (and the 2nd before hosting the 1st one, which also means I already have the theme for his 4th one but I'll keep that a secret) so come the first day of 2012, I took out all his beach/pool party supplies and started planning!

This year, a dear girlfriend introduced me to the world of Pinterest, and boy, was I hooked. Everywhere, I found ideas for his party. To the point where I had to drop ideas that I wanted to execute because there was simply too much to do! This year my brother in San Francisco also contributed to Aiden's party (thanks, Abang!) - he helped with ordering online party goodies from Oriental Trading and shipped it to a friend who then brought them back to sunny ol' Malaysia!

We had the party at the kiddy poolside (there is a separate adult pool) of our newly launched Clubhouse, and this year I wanted to keep the celebration small. Apart from just wanting our closest friends and family to attend, I also had to keep the numbers down because we had space constraints! Clearly the clubhouse did not take into account children parties when they were building the kiddy pool because the space could only take 4round tables and a handful of chairs along the side. And I didn't want to put the tables in a separate area away from the pool as I knew mothers wouldn't be able to eat in peace if they had to leave their kids playing in the water out of their sight. I even had to move the buffet line a bit further out so in the end we could really only accommodate about 60 people!

Me? Organizing a party for only 60 people? Downsizing my previous invitation of 200? *gasp*

Well somehow, we did it. Thankfully, because it was a pool party, most of the kids were contented just being in the pool while the parents lounged by the side. We also had kiddy tables and chairs and my neighbour-gang and highschool-gang occupied those (because they knew they were going to stay from start till end!) so that kept the round tables free for other guests. Playing in the pool was the main activity - therefore I did not engage any gamemasters or face painters this year, which meant less headache for the host too!


What party would be complete without a dessert table? This is of course, my pride and joy. I spent endless hours arranging the printables, planning the table layout, and of course baking! I was so happy with the end result.﻿﻿

Same as last year, since I placed a lot of effort in this, indulge in another picture, will ya?
﻿
﻿

Apart from the birthday cake, popcakes and the macarons (and the store bought candy), everything was lovingly baked by yours truly!
﻿

Because I had so much ideas for the dessert table, I ended up having another separate table for beach toys and drinks! And it was such a good idea to have a second drink station closer to the pool because the kids were constantly thirsty and did not have to venture to the buffet to quench their thirst. I was also very happy that the clubhouse agreed to make blue cordial to match the theme (yes, I am very kiasu that way) and even filled the second drink station periodically.
﻿
Just to emphasize how kiasu I really am, I bought those water guns and they came in yellow, green and orange. Since the theme was yellow and blue, I spray painted (yes I shall repeat that - spray painted) each green and orange gun to blue. That project took up at least two precious weekends. I even subjected the spray painted gun to a water test - submerged it in water for a day to see whether the paint would peel off!

Of course, there's more! Decorated a special table for Aiden to cut his cake. This year he's going to stand on his own two feet to cut the cake. No more Mummy lifting him up to do it! ﻿
﻿

And the birthday boy finally arrived! Dressed in a matching blue swimming suit and a charming smile that made all the preparation worth while!

Gradually the crowd started to arrive and soon the place was packed!
﻿
﻿

﻿
Soon it was cake-cutting time! And boy oh boy, it was definitely no easy task to drag Aiden out of the pool and force him into his birthday t-shirt! We did not even get a single smile out of him throughout the whole cake cutting session. But as soon as he went back into the pool, he was all smiles again!
﻿


Lucky me, despite the horrible April weather (and my insistence to have the party on his actual birthdate of 15th April), we got only a few drops of rain and a bit of thunder but the rest was beautiful and sunny. We had ample food and party packs, the kids had fun and most importantly, Aiden had a birthday to remember!

To everyone who came, thank you for making the time to attend. Looking forward to planning Aiden's 4th birthday party!﻿
﻿

Posted by LizYahaya at 9:15 PM

Thank you in advance for leaving a comment. ;) All comments are moderated. Liz