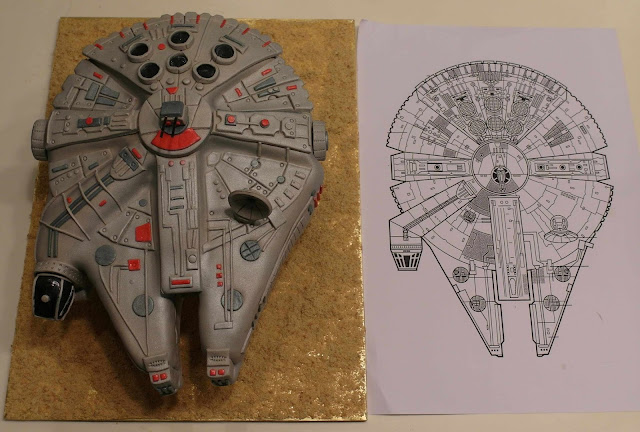 My oh my, the past three weekends of April certainly went by in a blur. I was so busy preparing for Aiden and Ian's Star Wars party that I didn't have much time for anything else (what more, blogging)!

But the party is now done and dusted. And I spent much of yesterday, enjoying the peace after the storm. I did absolutely NOTHING. Such bliss!


To kick off my recap of the said Star Wars party, here is a post dedicated to the birthday cake - the Millennium Falcon. This takes the cake (pun intended) for birthday cake paling gila we've done for our two boys. We slept past 5am, three nights in a row working on the cake; the first night for baking, sculpting the cake and crumb coat, second night covering it with a second layer of buttercream and then fondant, and the third night working the small fondant pieces. That final night, I think we clocked over 10 hours just for decorating to detail!

I downloaded a blue print of the Millennium Falcon here, and enlarged it so that the circular part is nine inch wide (to fit my nine inch pan). I printed a couple of copies for use. With the print out, I traced the template onto a cake board, and using an electric saw, Hubby cut the board to size. Also worth to note, the largest cake board I could fit into my fridge was a 13x17, so I was limited to only that amount of board space.


The cake was Aiden and Ian's favourite moist chocolate cake, layered with dark chocolate ganache. Everything was completely edible; no boards, wires or plastic supports were used inside the cake. Since the Millennium Falcon has a lot of slopes and ridges, lathering on buttercream on the very moist chocolate cake was no easy feat. By the time we were done, we had so many cake crumbs littered on the table. In the end we had to give it another layer of buttercream (on the second night) just to give it a smoother finish.

The night before the party, we started on the decorations from 5pm till 5am the next morning; with only brief stops for solat, shower and a quick bite to eat.

Cutting those small fondant pieces took a lot (and I mean, a whole lot) of patience. On some instances, we had to use a toothpick just to push the minuscule fondant into place. We made sure we incorporated all the nerdy details, such as the panels, escape hatches, floodlights and such. We tried as much as possible to follow the blueprint to the last detail, but by 430am we were just 'winging' the final details, mengantuk punya pasal.

Once the cake was ready, we gave it a good spray with edible colouring (I used Wilton silver colour mist) to give it that shimmery look. Unfortunately, it also covered the red coloured fondant with silver shine, so using cotton buds, we had to 'clean' those parts. We weren't able to completely remove the shimmer, but thankfully for us, the slight gleam gave the reddish parts a rustic look which worked well!

The cake was certainly the center of attention during the party. Many thought that it was a toy, not many expected it to be made fully from cake. We actually had to cut out a slice to show them the cake layers inside! And the excitement on Aiden's face the first time he saw the cake, was simply priceless. Made all our effort so worthwhile!

But, will we do this cake ever again? Naaahhhhhh... Taubat tak nak buat dah! *giggles*
Posted by LizYahaya at 10:59 PM

Thank you in advance for leaving a comment. ;) All comments are moderated. Liz